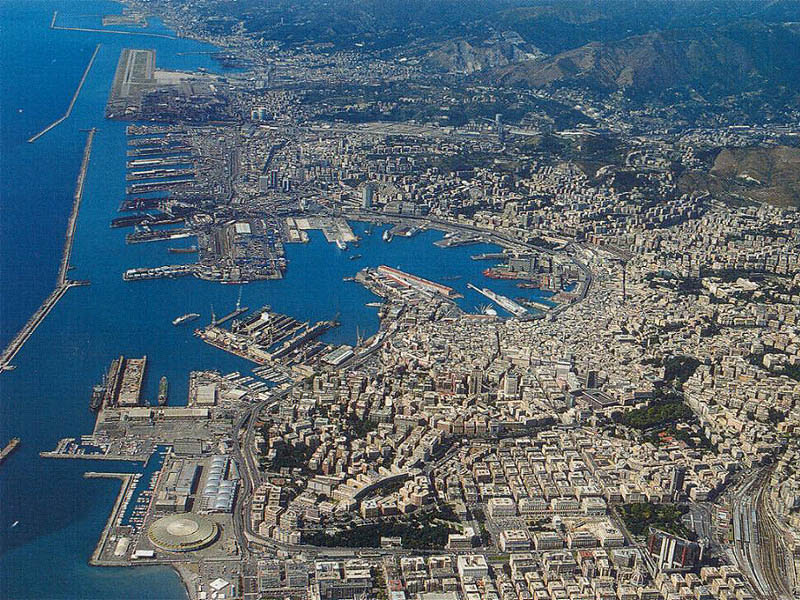 This entry is to tie up some loose ends, so it won't necessarily follow a consistent pattern and will probably bounce all over the place. Personally, I have had many questions about the patterns of immigration from the Italian peninsula over time. One of them is regarding early immigration to San Francisco from one specific perimeter around Genoa, which includes the rest of Liguria, Northern Tuscany, and even extends to Italian Monaco and Nice, France (formerly "Nizza"), and including Corsica. Over the years, I have heard locals tell of ancestors from Monte Carlo, Nice, and Ajaccio. In fact, the majority of Italian immigrants to San Francisco were from this perimeter, which I dubbed "the Italian Riviera circle."

It appears that prior to Italian unification, emigration out of the peninsula was generally restricted to this area. That explains a whole lot. There were nineteenth century Genoese communities not only in San Francisco, but New Orleans, and to some extent New York, Chicago, Philadelphia, and other large cities. Also from Tuscany to a lesser extent. This immigration went from about 1850 to 1880. After 1880, it fizzed out (except for California), and was replaced by Southern Italians in much greater numbers. There were a few exceptions, like in St. Louis, where Milanese immigrants formed a neighborhood called "The Hill."

Later immigration from other parts of Northern Italy was to "the cone of South America" (Argentina, Uruguay, Chile, and Sao Paulo, Southern Brazil). That's part of a whole new study which I can't go into now. It is odd, however, that the Northern Italians ended up in Southern-South America and California and Southern Italians ended up in the much closer eastern USA and Canada. That's not any innate rule, as there were "Northerners" who settled in the eastern areas mentioned, as well as Northern Michigan and Western Pennsylvania. As to why those particular areas, is a question which we haven't answered yet. And, there were Southern Italians that migrated to Buenos Aires, Sao Paulo, etc.

One Italian pioneer in early California was Leonetto Cipriani, who went on to co-found the San Francisco area city of Belmont, as well as a whole slew of other things. A short look at Cipriani experience in Belmont is located in a blog entry entitled 'Pioneers of Belmont California' on the Rougeknights blog. Also, a book was published from his own personal journal, written all during his vast travels through the West, entitled 'California and Overland Diaries of Count Leonetto Cipriani from 1853 Through 1871'. Cipriani was from Corsica, from an aristocratic background, and believed in Italian unification, including Corsica. He worked with the Italian consulates here to achieve that end. He was the first Italian to settle (for a time) in San Mateo County. Later, when he lived in Tuscany, he founded another city which he named "La California." How many locals do we have here who knew that? That is something that we have to look at in future study.

I should also mention that prior to 1860, Sardinia was also open to emigration. I have no information at all about Sardinian immigration. There was one Sardinian family on the block that I grew up on, with the familiar surname ending (do, ddo, da, or dda). This whole revelation is a key to understanding why, for example, there is a huge Lombardian presence in Argentina, and virtually none in the USA. If you traveled to Buenos Aires, it would be like what it is for Sicilians in New York City or Calabrians in Chicago. There's a lot of study to do, but at least we can start to unravel some of these patterns. They aren't necessarily positive or negative, but we need to understand some of the reasons.

Our friend Marco in Tuscany.... in fact, IN "La California," has stated that he will send us some information about his city, which will be much appreciated. You can read part of our communication at the end of 'Pioneers of Belmont California'. I barely scratched the surface on the life of Leonetto Cipriani, so that's another area of interest that we need to look into. He was indeed the first known Italian settler in San Mateo County.


1-27-11 ADDITION: I wanted to add an item here, rather than make a new post. Leonetto Cipriani is an important part of our local history, whether or not we agree with his politics. Just the foundation of "La California" alone should make that a fact. The following text is from the book 'Peninsula Portrait: An Illustrated History of San Mateo County' (Postel; 1988), under the section "The Italians":

“Perhaps the first Italian to live in San Mateo County was Leonetto Cipriani. Cipriani was born on the island of Corsica in 1812 to an aristocratic family. As a young man he became involved in Italy’s quest for unification, but he tired of the struggle by 1850 and decided to find his fortune by joining the search for gold in California. With much cargo, including an entire prefabricated house, two servants, and two friends (Alessandro Garbi, an engineer, and Guiseppi Del Grande, a patriot), Cipriani left for California in late 1851. Just before he departed, Victor Emmanuel II, the king of Sardinia, appointed him the first Sardinian consul to California, a position of honor but without salary.

“After Cipriani arrived in San Francisco, his work as consul put him in contact with other pioneer Italians who were working to improve the status of recently arrived fellow countrymen. In fact, with Nicola Larco and Domenico Ghirardelli, he eventually organized the Societa Italiana di Mutua Benificenza, a mutual aid society that created the first Italian American hospital in San Francisco. The organization still exists. Its main charge is the operation of the Italian Cemetery in Colma.

“While his office as consul was a prestigious one, Cipriani desired to accumulate wealth while in California. He therefore resigned his position and set out with his companion, Garbi, on a rather ill-fated cross-country cattle drive and “scientific” expedition. After returning from the adventure, he purchased acreage that had once been a part of the Pulgas Rancho from S.M. Mezes, a law partner of Cipriani’s cousin, Ottavio Cipriani.

“At this site in what is now Belmont, Leonetto Cipriani built a fine home and landscaped it beautifully. Garbi came to live with him, and the two men were often to be found in the company of “society ladies” at a nearby hotel.

“Between 1855 and 1860 Cipriani made several trips to Italy and participated in the long-awaited unification of that nation. In 1864 he was declared a count when his old political ally, Victor Emmanuel II, became king of Italy. After hearing of this honor, Cipriani sold his estate and returned to Italy.

“Cipriani’s experience as an aristocrat was, of course, completely different from that of the Italian immigrants who followed. Like Cipriani, however, the first of these individuals came to California because of the Gold Rush. Most became discouraged and settled in the North Beach area of San Francisco. A few who had formerly been peasants came down the peninsula. Some took jobs as laborers on the farms of the Irish and German immigrants who preceded them. Others must have been struck by the apparent environmental similarities between their old country and the new. They purchased or leased land, and began growing vegetables the way their people had for generations.”

I didn’t photocopy the entire section at the library back when I got it some time ago, but I wanted to at least add the part about Cipriani. There is also a parallel with France and Corsica, with the former refusing to let go of the later like they did with Algeria and other regions. Corsicans are not French. Their language is not French. In fact, their language has been outlawed. Sound familiar? The section also goes on to discuss the connection with Genoa and an outline of the local history. We can look at that at another time using more thorough source material.

The term "Padanian-American" is used to describe the extremely marginalized Northern Italian-descended people of Northern California and other small pockets of the United States of America. The proper term for "Padanian" in Italian is "Padano." The proper term for "Italian-American" in Italian is Italoamericano. Therefore, clearly "Padanoamericano" would be the coined Italian term in reference to anything Padanian-American.

I have communicated with people in Northern Italy, and they seem totally unaware of over one million Northern Italian-descended Californians. There is a small portion who have heard of North Beach. When Italy was competing in the World Cup in 2006, there were a sizable number of Italian nationals in North Beach. A lot of local Italians mingled with them for those weeks. Very interesting.

I've noticed that a few groups claim certain small areas as their neighborhoods, often in now unpleasant environments. I think the bar needs to be raised. Since we've been so geographically deconstructed, I think that we should just consider the entire Bay Area as our "hood." It's time to think on a bigger scale. There are some who I believe have a hold on us, and unintentionally are holding us back now. You know what I mean. You look at the board of directors and every one is male, white haired, and unapproachable. As a friend of mine once told me in reference to them: "They think they're old bad-asses," which pretty much hits the nail right on the head. Often the "young guy" of the group is 50. That's what we have leading us, and it's not working anymore. Unique and changing problems cannot be addressed in this manner.

There needs to be a complete paradigm shift soon. It's perfectly fine to have a "men's club," but that should be a completely separate endeavor. And to finish this entry, and it bears repeating, if people are a cross in heritage between the historically northern peoples (Ligurians, Tuscans, Piemontese, Lombardians, Venetians, etc.) and those of Sicily and Southern Italy, they may consider themselves Padanian-Americans.

Posted by Camunlynx at 12:26 AM No comments: